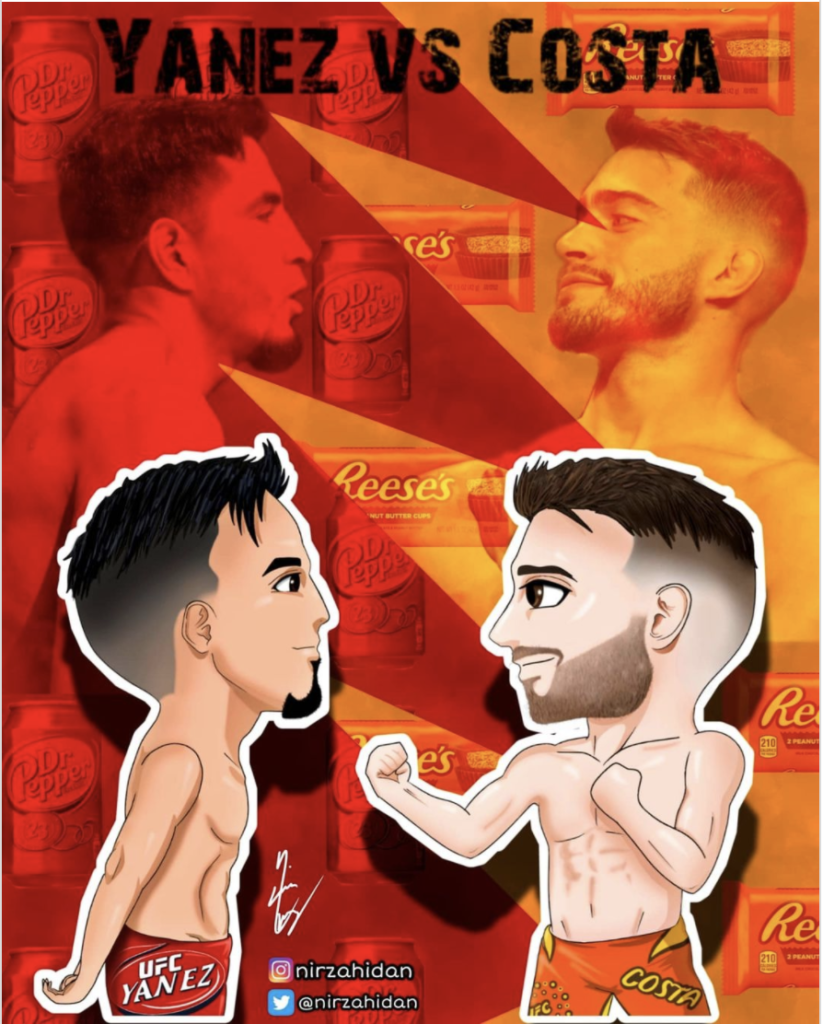 When I think of my favorite cheat snacks or drinks, my mind instantly goes straight to Flamin’ Hot Cheetos with Limón, Nerds Gummy Clusters, and the illustrious Hi-C Orange (thank you for doing the right thing, McDonald’s).

However, these world-class fighters Adrian Yanez and Randy Costa are loyal to their cheat snack/drink: Dr. Pepper and Reese’s.

And just for that small disagreement over one’s favorite snacks and drinks, we now are all excited to see such a great fight in this weekend’s UFC main card.

You Don’t Mess with the Zohan.

The Zohan is exhilarating and his fights make you come back wanting more and more.

Randy has amazing power at 135 pounds, as all of his wins (6) are by 1st-round knockout.

Costa throws everything in his punches and kicks.

In his fight against Boston Salmon (6-2), we saw him go against someone who was very aggressive from the start, as a way to take away Randy’s biggest strength: his range.

Costa showed great intelligence and technique in the clinch positions to make sure his opponent could not give any damage, and, when he was safe, disengaged to fight in the open space.

As Costa found his range, he found Boston’s chin, instantly wobbling him and earning two knockdowns in his KO/TKO win.

The Zohan is restless, reckless, and remorseless.

Once he starts, he’s not stopping.

In his most recent fight, against Journey Newson (9-2), we witnessed Costa establish his range straight away.

Randy loves his head-kick finishes and due to Costa having a four-inch height advantage over the 5’5 Newsome, Newsome’s end was inevitable.

KNOCKOUT OF THE YEAR NOMINEE!! 😱

Randy Costa (+107) hits Journey Newson with an insane head kick for the 1st round KO.
pic.twitter.com/qDEbqdKxnz

The key to Randy Costa winning always starts with Costa getting into a rhythm and starting fast.

What remains in question is if Costa’s still the same 1st-round electric fighter in rounds after the first. Yanez will not only test his chin but his cardio and will.

If Randy “The Zohan” Costa is exhilarating, ‘Lil Masvidal’ Yanez is box office.

Adrian Yanez can do it all.

He has crisp, tight boxing, a great chin, good cardio, and smoothness to his fighting, just like the UFC star Jorge Masvidal.

Adrian is very agile, continuously bouncing in and out of his movements, keeping his opponents on watch.

While he is still very young in his UFC career, Yanez has shown repeatedly that his takedown defense is formidable, as he has not been taken down in his three UFC fights.

In his fight against Victor Rodriguez, we saw Yanez’s head movement and footwork in motion as he weaved through Rodriguez’s attacks all-round.

Adrian loves fainting or doing small movements to get the opponent to open up and move, he easily broke down Victor.

What separates Randy Costa and Adrian Yanez as fighters is how they fight when they have their opposition hurt.

Randy Costa is in full force, in your face, pouncing on his opportunity for the win.

Adrian Yanez, however, remains cool, calm, and collected, as if he already knows the outcome of the fight. He stalks his adversary’s moves, making them feel and wear their mistakes all over their body.

Against Victor Rodriguez, we saw just that. His faints and deflections rose Victor’s guard, his jabs and combinations scared Victor from going forward, and the head kick sealed the deal.

With 16 fights under his belt, Yanez is a proven commodity the UFC wants to push in the bantamweight division.

Yanez is a well-rounded fighter who pushes a pace he forces his opponents to stay at.

He loves the violence, so he will take one to give one, just to see what his opponent is about. If Yanez controls the cage, it is hard to see him lose against non-top-10 bantamweights in this division.

This Fight’s Importance (Yanez vs Costa)

The support for Adrian Yanez vs. Randy Costa has been something special.#UFCVegas32 pic.twitter.com/iRfLk9owG3

It is very rare for the UFC to pair up two young, highly touted prospects against each other this early in their UFC careers.

What is wildly interesting about this fight is how naturally it came about.

Two hungry fighters with a clear respect for one another fighting because they love to and want to give their fans what they want most: violence!

With the UFC and fighters alike trying to protect their respective brands, we usually do not see the product we always want.

Furthermore, that is why this fight is almost as important as any fight on this card aside from the main event.

No politics, excuses, or issues, just a fight to see who’s the better man that day.

With more and more fighters like Randy Costa and Adrian Yanez taking over the UFC platform, the UFC and its fans will be very excited for what’s to come in the future.

Prediction: Adrian Yanez by 2nd or 3rd round TKO/KO

Oklahoma, Texas Say Goodbye to the Big 12, Head for the SEC