With the NFL combine a week away and the NFL draft a little over two months away, we can begin to start projecting the best rookie fantasy players for the upcoming season. This class is loaded with stud receivers, good backs and will likely have 4-5 quarterbacks taken in the first round.

Not only will Burrow be taken first overall, he will also be the best rookie fantasy player in 2020 in terms of overall points. Last year rookie quarterbacks put up solid numbers with the likes of Kyler Murray, who finished 7th overall in points in 2019, and Daniel Jones, who finished 22nd overall.

Burrow will also have a myriad of weapons at his disposal with Tyler Boyd, Joe Mixon, Gio Bernard, and potentially AJ Green, given Cincy resigns him. Cincinnati will not be a good team in 2020 and will most likely be playing from behind more often than not, which will bode well for fantasy owners who take a chance on Burrow.

This pick probably won’t be the most popular since Herbert will most likely get drafted after Tua Tagovailoa. However, I believe that if the Chargers draft Herbert, he will have more immediate success than Tua. Herbert in LA would produce instant fantasy numbers with the ridiculous amount of weapons in his arsenal. Gordon, Ekeler, Allen, Mike Williams, and potentially Hunter Henry, pending a new contract. That should be every rookie quarterback’s dream.

Tua Tagovailoa is difficult to project for fantasy football at the moment on account of the gruesome hip injury he suffered last November, which resulted in the end of his playing career at Alabama. As a result, Tagovailoa is now commonly expected to be the second quarterback taken in the 2020 NFL Draft. Rumors are swirling that the Detriot Lions are looking to move Matt Stafford and take Tua 3rd overall.

Tua may very well end up being the best fantasy rookie in 2020 if he ends up in Detriot, but if Miami drafts him, he might sit for a few games behind Ryan Fitzpatrick. Such would diminish his immediate fantasy value. I also believe the Lions have the Dolphins beat with their pass catchers. I think Tua’s situation and landing spot will have more impact on his fantasy value than any other player. 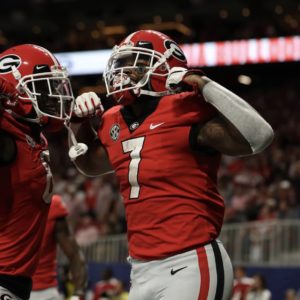 Simply put, D’Andre Swift is electrifying. He can do it all, and in my opinion, he will be the first back to come off the board in April. Swift is going to be a very hot PPR commodity after displaying quality receiving skills throughout his tenure at Georgia. I do not think it matters where Swift lands in April for him to find success.

Even if he lands on a team with a runningback-by-committee, it will be hard for the play-caller of said team to keep him off the field. He’s just that good. He is a three-down back, and Bleacher Report’s senior scout, Matt Miller, is comparing him to Saints star Alvin Kamara. Swift is going to be good for a long time.

Another exciting back is Jonathan Taylor, whom I believe will also blossom with whatever team is lucky enough to have him. I think Swift has a slight edge on him fantasy-wise, but that Taylor will put up some decent numbers as a rookie in 2020. I think Taylor would thrive on a team with an established offense, specifically the Atlanta Falcons.

CeeDee Lamb has NFL superstar written all over him, and I believe he is going to be a nightmare for NFL cornerbacks for years to come. He has elite ball tracking skills and looks like a running back in the open field when he’s carrying the rock. Lamb is a red zone threat and, in my opinion, will be the best receiver from this class.

This receiver class is loaded, and Alabama may have 3 of their own selected in the first round, the best of the bunch being Jerry Jeudy. It’s hard to rank rookie receivers higher than QB’s and RB’s due to the plethora of good to really-good receivers that are always in the league.

The best rookie fantasy receiver in 2019 was AJ brown, and he finished 23rd overall in PPR. Jeudy is a phenomenal receiver with ridiculous route-running skills and will have no problem getting open and making plays in September. He is also better than any receiver that was drafted in 2019 and could thrive immediately if drafted by a team with an established signal-caller.

Speed kills, and Ruggs is going to kill defensive backs wherever he lands in 2020. Ruggs has incredible speed that is going to make fans hold their breath every time he touches the ball. Ruggs can be everything John Ross was supposed to be. The big home run hitter- if you blink twice, you’ll miss him.

Ruggs may end up with the most touchdowns out of all the receivers coming out of this class. I think seeing him in Buffalo with Josh Allen would be a lot of fun to watch.

The first thing you immediately notice about Higgins is his massive 6’4″ frame. Higgins is incredibly physical and would be a welcoming addition to any quarterback in the league. Higgins will have success in the red zone and could contribute immediately to a team like the Philadelphia Eagles.

Last but not least, Jordan Love. I believe Jordan Love will be the 4th quarterback off the board. His fantasy value, however, will be directly tied to who selects him. If he’s taken by a team like the Saints who are searching for Brees’ heir, he will not step foot on the field.

Fantasy football addict. Somehow still obsessed with the Chicago Bears even thought they haven’t been obsessed with winning since ’85. Journalism student.