Four days before she stepped foot into her first classroom at the University of Georgia, Hale Otto sat in her dimly lit, soundless dorm room, already feeling defeated. A residential hall that is normally bustling with high-energy college students was now filled with an eerie silence. Reality had set in. For the first time since her injury, she understood the mental challenge that lay ahead.

With the defender’s junior season just a mere four months away, Hale Otto is working to overcome her past trauma and finally prove that she belongs.

Soccer has always been a part of her life. The Dallas-area native began playing soccer at the early age of three, and by the time she turned five years old, she was already playing club soccer.

“Most people are surprised by that age of starting with an intense and elite team, but it was just kind of expected of me by my dad,” said Otto.

She credits her father, a native Belgian and former Texas Christian University soccer player, for introducing her to the sport.

But like any kid, Otto grew exhausted from the constant effort and training that club soccer required. According to her, it wasn’t until she took a six-month hiatus from the sport at age eight that she realized soccer was her passion.

“I felt like I was missing out on the things that every other kid got to do, so I told my dad I wanted to quit. I quickly realized how much I missed it and that soccer was going to be something that I had to do,” said Otto.

Otto’s playing career really began to transcend when she was selected to play for FC Dallas’ youth affiliate team at the age of 11.

FC Dallas is a professional soccer club that competes in Major League Soccer. Its youth teams are designed to select and develop some of the best junior players in the country. So for Otto, this experience would prepare her to compete against the country’s best competition.

“You have to perform in a way that is acceptable for the best of the best,” Hale says. “It was intense, but it helped me become more motivated and determined.”

Fast forward a few years, and the once novice adolescent had become a sought-after recruit. The two-time varsity captain of McKinney High School committed to the University of Georgia in February of 2018.

Hale Otto is official! Welcome to the Bulldog family! pic.twitter.com/b8ESpM5cRQ

Unfortunately for Otto, the celebration was short-lived. During a pre-season exhibition match against Duke, Hale Otto tore her right ACL.

An ACL tear can be devastating for an athlete because of how grueling the rehab process is. You are fighting post-operative pain that is both agonizing and exhausting, paired with intensive physical therapy that, in the moment, seems unproductive and extreme.

But there is something significantly more dangerous: a battle that requires a supreme amount of willpower to overcome.

Yourself. And for Hale, it was no different.

She was forced to redshirt her freshman season, and while her classmates were getting acclimated to the team and university in general, she had to turn her attention to rehab immediately.

Otto’s rehab process faced obstacles that most others did not. She has hyperextended knees that made regaining mobility in her knee significantly more challenging.

In fact, the severity of her condition led to two follow-up surgeries. Both surgeries were aimed at removing the scar tissue that formed during her ACL reconstruction. The first took place in December of her freshman year, while the second took place at the end of her second season.

“It was like I was running into more and more walls,” says Otto. “It was hard to be motivated. I felt like I was never going to get there.”

“I had to realize that the situation was out of my control,” says Otto. “If I just kept pushing, I would get to where I wanted to be. I’ve been playing soccer so long that it would be too easy to stop now.” 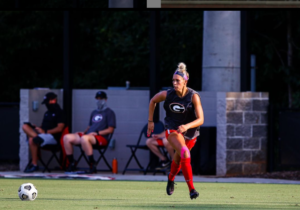 In her second season, Otto was placed on a minute restriction to aid her recovery. She appeared in only 11 games, and even then, usually as a substitute in late-game action.

Although she was cleared to return to play, it was hard for the young defender to find her rhythm.

“I was nervous,” says Otto. “I didn’t want anyone to tackle me because I was so fearful of getting injured again.”

Weldon Kolker, Hale’s teammate and current roommate, says, “She’s just such a perfectionist, so while her injury does play a part in her nervousness, I think she just really wants to perform at the top of her game.”

Due to Covid-19, the Georgia women’s soccer team only played eight games during Hale’s redshirt-sophomore year, down from its usual 20-game schedule.

“It was starting to feel like I couldn’t catch a break. I was doubting whether I was meant to play or not,” says Otto.

Now, Otto is entering her fourth year of eligibility and has yet to play a full season.

Otto saw an increase in her minutes during the last spring season and hopes to build off of that momentum this fall.