The 2019-2020 NCAA men’s basketball regular season has ended. Conference titles have been awarded, and now most Division-1 tournaments are in full swing.

Selection Sunday is just one week away, and so is the beginning of the mad dash to complete brackets and place bets on all of the games.

What was last year like? Sure, there were a few upsets, but for the most part, we saw tight competitions between top teams.

The regular season shocked us all over and over again, and it has been wild from start to finish.

The Associated Press ranked perennial powerhouses North Carolina and Virginia Nos. 9 and 11, respectively, in their preseason poll. Soon after, however, they were definitely not. Other hopefuls such as Florida, Texas Tech, and Memphis also experienced a hard fall.

Michigan State was as high as No. 1 before the season started, and while their current standing at No. 16 is nothing to scoff at, it certainly is evidence of the up-and-down season they’ve had.

Remember when only four Big Ten teams were ranked?

Pepperidge Farm remembers. Now that number has doubled to eight, and the number of schools projected to play in the NCAA Tournament is upwards of double digits.

The American Athletic Conference cannibalized itself all year, making it look like a season of Pac-12 football. Cincinnati, Houston, Memphis, SMU, Tulsa, UConn, and Wichita State took turns upsetting each other. The Golden Hurricanes (21-9, 13-4 AAC) locked up a share of the regular-season title, and with a win on Sunday, can clinch the championship outright.

On Saturday, No. 7 Florida State ran over Boston College 80-62 to win their first ACC championship in school history. And who foretold us of Dayton and San Diego State becoming two of the top five teams in the nation?

It’s safe to say we should expect more chaos starting March 17. If you’re looking for a Cinderella team to make some noise, these four teams should be on your watch list.

Any fan that somewhat regularly keeps up with NCAA basketball should vaguely remember this name. The Jacks are known for their ability to upset powerhouses, and they did it again earlier this season. In late November, SFA battled then No. 1 Duke right down to the buzzer. Senior Nate Bain stole the ball and laid it in at the other end with seconds left to beat the Blue Devils 85-83 in overtime, stunning a frenzied crowd at Cameron Indoor Stadium.

NO. 1 DUKE FALLS TO STEPHEN F. AUSTIN IN A STUNNING ENDING 🤯 pic.twitter.com/x6xsdesWkL

How can a team possibly top that performance in a season? Just ask the Jacks, as they went on to finish the season with 15 wins in a row and the Southland Conference regular-season title. They sit at 12th in the nation in points scored per game (80.6), and senior guard Kevon Harris leads the team with 17.5 points per contest. ESPN’s Joe Lunardi currently has them as the 12th seed in the West region, facing No. 5 Ohio State. With the Buckeyes’ inconsistent season, they certainly aren’t overlooking the Lumberjacks, and neither should anyone else. 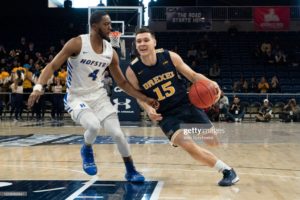 WASHINGTON, DC – MAR. 08TH: Drexel Dragons Guard Matey Juric (15) dribbles the ball with Hofstra Pride Guard Desure Buie (4) defending during the first half of the Colonial Athletic Association Men’s Basketball Championship Tournament between the Drexel Dragons and the Hofstra Pride on March 8, 2020, at the Entertainment and Sports Arena in Washington DC. (Photo by Gregory Fisher/Icon Sportswire via Getty Images)

The Pride are riding high after starting the 2020 Colonial Athletic Association tournament with a 61-43 win over Drexel on Sunday. It’s their second straight win, and their first was equally, if not more, monumental. On February 29, Hofstra shot the lights out of the building, hitting 20 3-pointers to set a school record and win their second conference title in a row, 97-81 against James Madison.

In addition to SFA, Hofstra also sits as a top-50 scoring team in the nation. Barring any major slip-ups, they’re projected to be the 14th seed in the West. When their 3-pt shooting is on, the Pride could pose a significant threat to vulnerable teams such as Seton Hall and Penn State, for instance.

The Bruins are the Ohio Valley tournament champions after winning another tight battle with conference foe Murray State, as Tyler Scanlon scored with three seconds remaining Saturday night to win 76-75.

Here it is: The play that sent the #Belmont Bruins to the NCAA Tournament, featuring the sexiest backdoor cut you'll ever witness. #OVCTourney pic.twitter.com/IQIf1XY18B

After two consecutive losses to the Racers and Austin Peay in January, Belmont reeled off 12 straight wins, most of them in blowout fashion. The Bruins offense is by far the most formidable part of their game. They rank third in the entire country in assists per game at 18.3 and are scoring 79.6 points on average (22nd) as a result. Lunardi has them at 14 in the Midwest, and they could move higher by the time Selection Sunday rolls around. Belmont is the second team to punch their ticket to the national tournament officially. The first is about to be introduced.

Remember how Belmont beat Murray State in the waning seconds to win the conference tournament? Yeah, Utah State did just about the same last night. Except, in the process, they upset the No. 5 team in the nation in San Diego State. Star guard Sam Merrill scored 27 points, including a last-second three bomb, to lift the Aggies over the Aztecs (30-2, 17-1) and win the Mountain West for the second year in a row.

Merrill leads Utah State in both points and assists per game as part of a well-balanced Aggie team that is top-50 in both offense and defense. Any team that’s bursting with confidence will be a tough out in the tourney, and Utah State is no different. Expect them to make noise in the Midwest as well.

All stats are courtesy of ESPN.com